Replacing an AR XA Tonearm with a Mayware Formula 4, MKIII

Starting out….the top deck has that disgusting brown flock which has become very sticky and grimy 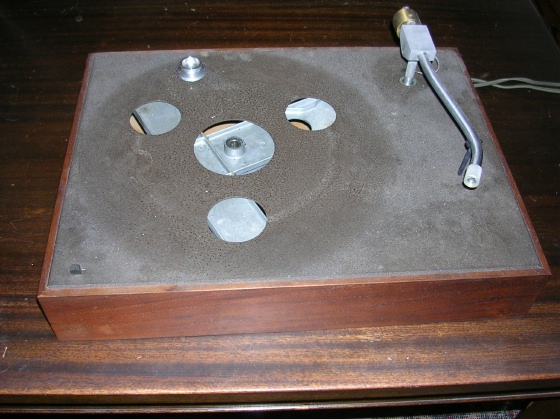 Dismantling all of the parts..I put them in baggies so I wouldn’t lose them 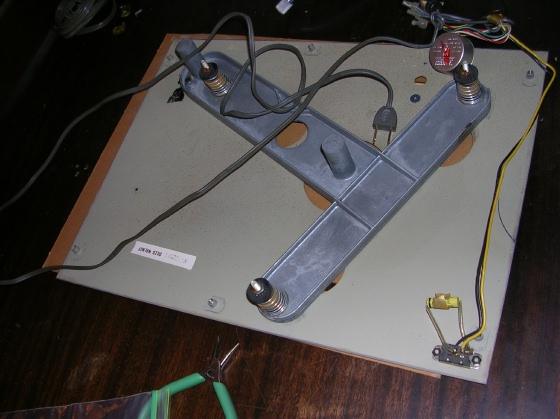 With the T-bracket off I was able to compare the mounting template that came with my used Mayware Formula 4 MkIII. The actual mounting distance seems to be a hair shorter than the original AR arm. My mounting template has the spindle hole mispunched to I backed up the measurement with a metal ruler. It’s easy to use a Sharpie and make some layout lines on the T-bar for reference. I also used a piece of duct tape to cover over the platter spindle bearing to keep filings out of it.

I happen to own a 1 1/8 chassis punch so I used it to cut a hole in the top deck for the tonearm. I pretty much centered this around the current hole. 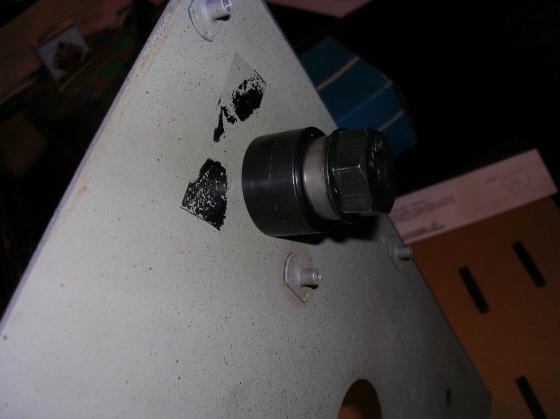 I used a simple hacksaw to cut off the tonearm bearing. I’ve seen some modification procedures that also suggest grinding down the outer flanges on the bracket….I found this to be unneccessary so I left them in place. 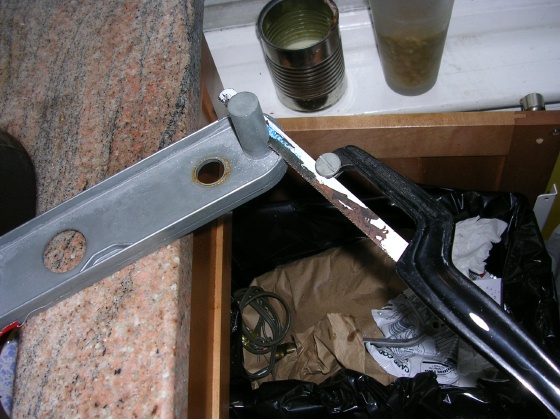 The remaining part of the bearing I drilled out using my 7/8 step drill. 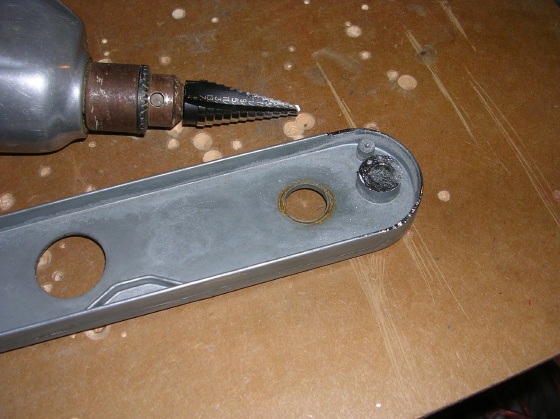 There is a small flange for the original grounding nut that needs to be removed…I prilled out most of it with a regular power drill and used my Dremel tool to flatten the area a bit. While I was at it, I used the dremel to enlarge the hole a bit to give me some wiggle room for mounting. 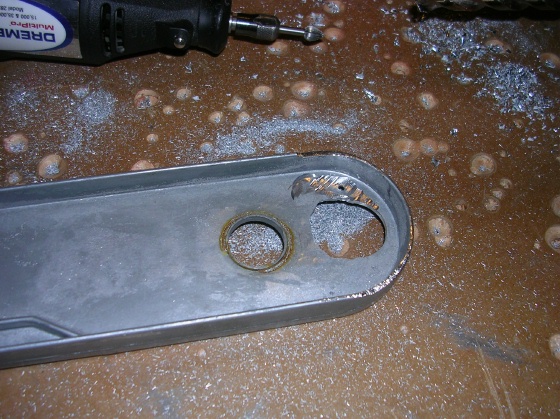 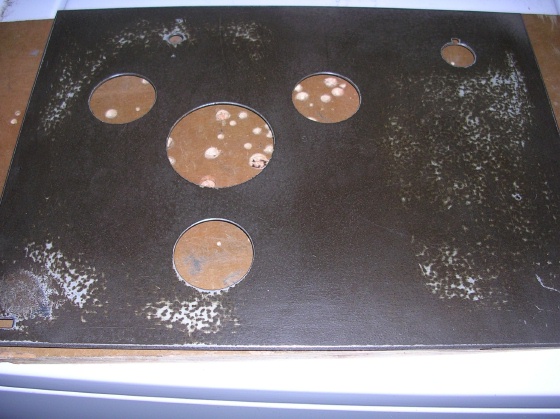 I gave the deck a nice fresh coat of paint….a copper hammertone look courtesy of Rustoleum. 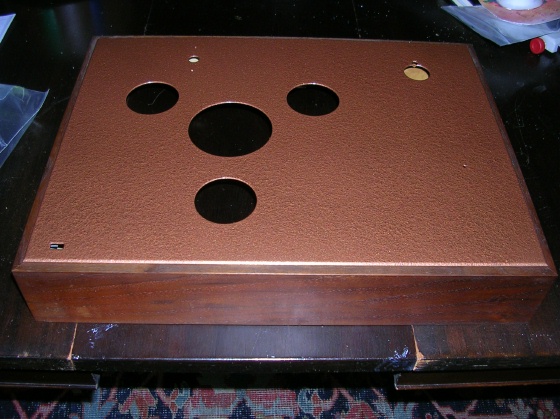 The T-bracket rings quite nicely when it’s tapped….so I added a bit of rope caulk to it. I also added some scraps of Dynamat that I had to the underside of the top plate. 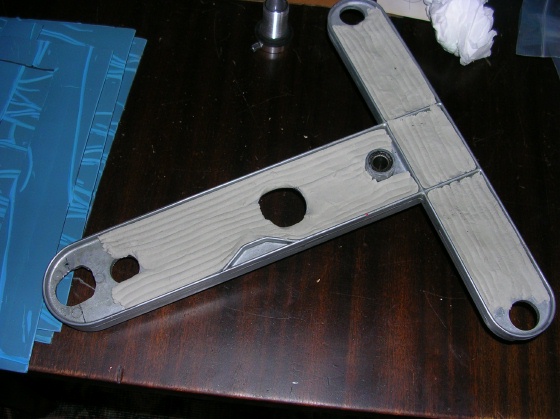 Reassembly of all the parts. The arm mounting stud is solidly mounted to the T-bar with nuts on either side (thank you, Dave). I drilled a second hole for the ground connection for the T-bar and replaced the ground strap to the deck. I also ran another ground connection from the same T-bar lug right to my amplifier to eliminate hum (not shown). The tonearm cable was also secured with a clip to the wood plinth to keep it from binding up the suspension. I originally bought heavier duty springs and studs from Anthony Scillia for this project but since I decided not to replace the plinth, I chose not to use them as they were too long for the stock plinth. Some day I will build a new plinth and use them. The original springs seem to work fine with the Mayware arm for now. 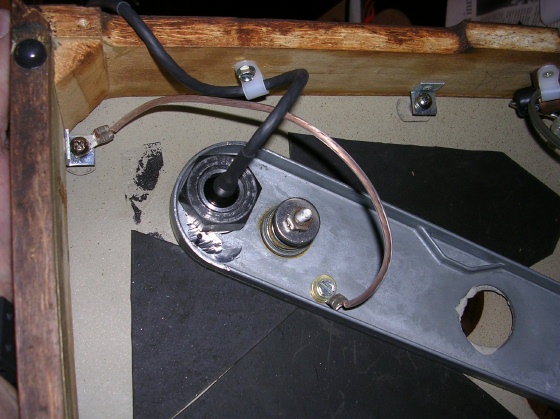 The used Mayware that I got off Ebay had a fractured integral arm rest. At first I thought I would remove it and get a stand alone arm rest for it (The original AR Arm rest doesn’t work particularly well in this application…and let’s face it…it’s kind of cheezy. I may eventually see something nice in my travels, but for now I took the old one off and bought an arm clip meant for a Technics 1200. I Crazy glued it to the end of a nail and cut the excess off with a Lineman’s pliers….it fit in the same hole as the original rest. I also added a bit of silicone caulking to the rest (shaped a bit with a toothpick) to build up the contour so the lock would actually work (the Technics arm diameter must be quite a bit bigger than the Mayware). Not exactly the most elegant solution but it works. One last issue- the fine wire for the antiskate had broken so I replaced this with clear nylon sewing thread (courtesy of my wife). It works quite well once you get all of the little knots tied (a tweezer is a must for this) 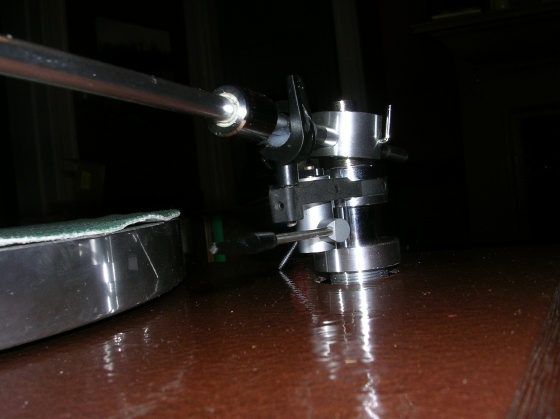 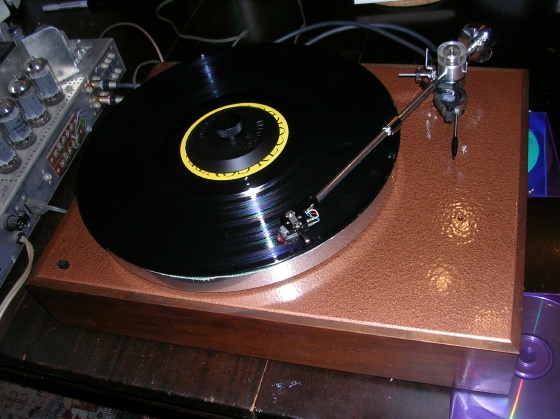